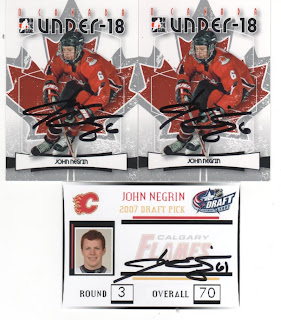 Yesterday I was able to acquire Calgary Flames prospect John Negrin's autograph. John plays defence for the Kootenay Ice of the WHL. He has 3 goals and 16 assists this season so far. He has tripled his goal total from last year. He had 41 assists last season and the Calgray Flames saw enough potential to draft him in the 3rd round 70th overall in teh 2007 NHL Entry Draft. He was able to represtent Canada in the World Under-18 Champioships where he got an assist on a game tying goal scored by Colton Gillies against the USA. John wass kind enough to sign 5 items for me, 2 ITG O Canada cards, 1 2007 Draft card and 2 blank index cards in 24 days. Thank so much John and best of luck.

Also a big congratulations to Cory Schneider who made his NHL debut November 29th. He lost the game 4-2 but had a strong showing against the Flames and displayed potential to become a good NHL g
Posted by Rob's TTM Graphs at 5:22 PM