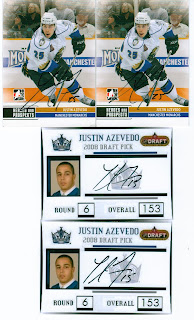 Justin Azevedo
c/o Manchester Monarchs
4 of 4 and actually signed my draft cards instead of keeping them like last time.
Sent Jan 23, 2012
Received Jan 31, 2012
8 days
Justin was an exciting player to watch back when he was with the Kitchener Rangers of the OHL. His mantle must be covered with awards from his junior days as in his final year he looked unstoppable when it came to scoring. The major knock on Justin is his size, being listed at 5'8" is tough when you are trying to make the NHL. This is my second success with Justin and I have also met him during his Kitchener days.
Posted by Rob's TTM Graphs at 11:52 AM 3 comments: 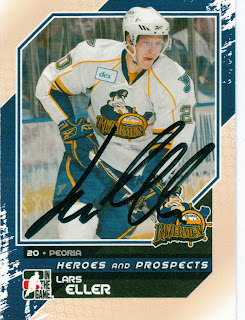 Lars Eller
c/o Montreal Canadiens
1 of 3 returned other unsigned. They were duplicates
Sent Dec 2, 2011
Received Jan 25, 2012
54 days
Lars is a former 1st round pick who was included in the trade for Jaroslav Halak. He is have a career year this season with 22 points in 58 games for the Canadiens.
Posted by Rob's TTM Graphs at 11:48 AM 1 comment: 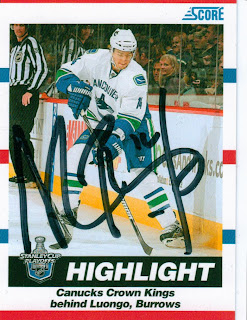 Alexandre Burrows
c/o Vancouver Canucks
1 of 3 kept 2 cards
Sent Dec 6, 2011
Received Jan 9, 2012
34 days
Alex is an easy player to hate, but I'm pretty sure everyone wishes that he was on their favourite team. From being an excellent agitator to having a scoring touch. He is a very complete player and I'm happy to be able to add his autograph to my collection.
Posted by Rob's TTM Graphs at 11:40 AM No comments:

We Have a Trade to Announce

I was able to pick these up on a site that I belonged to. The trade was Jordan Staal, Ryan Smyth, and Alexander Semin for Patrik Elias, Ilya Kovalchuk, and David Clarkson. I was happy to add these to my collection as I had never seen a TTM success from Kovalchuk or Elias and I had duplicates of ever player that I traded away.
Posted by Rob's TTM Graphs at 2:24 PM 2 comments: 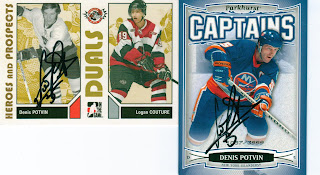 Denis Potvin
c/o Ottawa Senators
2 of 3 kept a card
Sent Dec, 6, 2011
Received January 3, 2012
28 days
Denis is a Hall of Fame defenseman who was the 1st overall pick in the 1973 draft. He has put up some amazing numbers through his career including 123 points in 61 games during his final year in juniors. He also has quite the well stocked trophy case which includes a Calder and 3 Norris Trophies. He also won 4 Stanley Cups as a member of the New York Islanders dynasty in the early 80's.
Posted by Rob's TTM Graphs at 2:16 PM No comments: 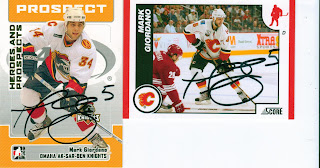 Decided that it was time to start updating my website a little bit so I'll start out with the first success I got this year.

Mark Giordano
c/o Calgary Flames
2 of 2
Sent Dec 2, 2011
Received January 3, 2012
32 days
Mark is one of those solid defensemen whose fine play often goes unnoticed if you are not a fan of the Calgary Flames. Going undrafted in juniors he was able to earn himself a contract after 2 seasons with the Owen Sound Attack of the OHL. He had a career year last season putting up 43 points. Mark also shares the same birthday with myself being October 3rd.
Posted by Rob's TTM Graphs at 2:08 PM No comments: