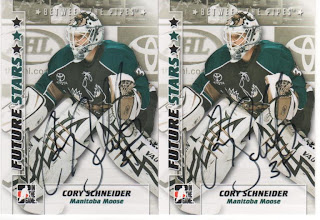 Cory is a goalie for the Manitoba Moose and a prospect for the Vancouver Canucks. Cory played at Boston College and had an impressive career there and was selected to Hockey East's All-Rookie Team in 2005, he also has the Boston College single season shutout record with 8. He won 65 games in a BC sweater and was drafted in the 1st round 26 overall in the 2004 NHL Entry Draft by Vancouver. As of now he has won 31 games in the AHL and is currently called up by Vancouver though he has yet to play a game. He is a highly rated prospect for the Canucks. Cory was kind enough to sign 4 items including 2 Between the Pipes cards and 2 index cards that I used to protect the cards. It took 30 days to get back. Thank you so much Cory and best of luck.
Posted by Rob's TTM Graphs at 1:54 PM