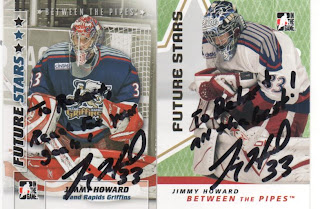 Jimmy started out his career playing for the U.S. National Development program which he than accepted a scholarship to the University of Maine. After winning Hockey East Rookie of the Year he was drafted in the 2nd round by he Detroit Red Wings 64th overall. He is the only goalie to face a penalty shot in his fist two NHL games. As of November 22, 2008 Jimmy has played 8 NHL games in a Red Wings uniform he as a record of 1-4 with a 2.56 GAA. Jimmy was nice enough to sign and personalize two cards for me through the Grand Rapids Griffins in 31 days. Thank you so much Jimmy!!
Posted by Rob's TTM Graphs at 6:51 AM