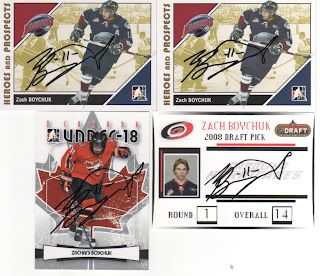 Today's mailbox had the Carolina Hurricanes first round draft pick and Lethbridge Hurricanes star Zach Boychuk. Zach played two games for Carolina before being sent down to his junior club. As of today Zach has scored over 100 goals in his 4 years in the WHL which is very impressive. Last year in 61 games Zach scored a career high 33 goals for a total of 72 points. This was good enough for Carolina to draft his with the 14th overall pick in the 2008 NHL Entry Draft. Zach has 16 points in 14 games so far and is on pace for another great season. Zach was kind enough to sign 6 items for me 2 Heroes and Prospects for my set, 1 O Canada card and 1 2008 Draft card for another set im building, he also signed 2 Index cards which I used to protect the cards I sent him. This took 28 days and I sent them to the Lethbridge Hurricanes. Thank you very much Zach and best of luck with your career in hockey.
Posted by Rob's TTM Graphs at 1:52 PM