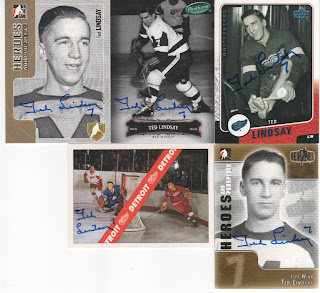 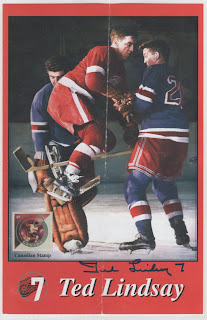 Ted Lindsay is a Red Wings Legend. "Terrible Ted" as he was known played 17 seasons in the NHL from 1944-1965. He played 14 seasons with the Wings and 3 with the Blackhawks. He was part of "The Production Line" which was made up of Gordie Howe and Sid Abel and himself. He has 379 goals and 851 points in his career. Ted won 4 Stanley Cups and was selected to 9 All-Star games. He also won a Memorial Cup with the Oshawa Generals when he played junior hockey. He was inducted into the Hall of Fame in 1966 and his #7 hangs from the rafters at the Joe Louis Arena. Mr. Lindsay was kind enough to sign the 5 cards I sent him and also included a signed pamphelet from the Canada Stamp that he was featured on. He signed everything in 48 days. Thank you so much Ted you are truly a class act.
Posted by Rob's TTM Graphs at 1:54 PM