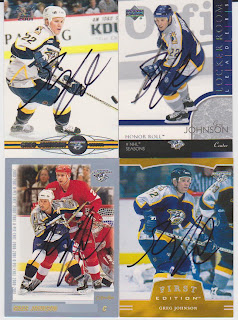 Greg played over 700 NHL games and did the little things well, even though he wasn't a very flashy player, he got the job done. He served as the second captain in Nashville Predators history between 2002 and 2006. He has also scored a goal before a game ever started as he did so isn the game when Red Wings defenseman Jiri Fischer suffered cardiac arrest. The game wass posponed after that incident and the whole game was replayed, but Nashville started the game witha 1-0 lead. Sounds like something out of a game of road hockey when one team has better players. Thank you Greg for the autograph!

Nice. What was the address you used? I'm looking to add Johnson to one of my autograph projects.