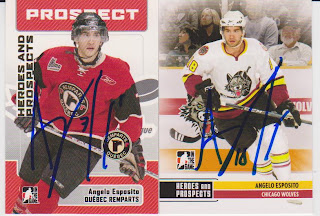 Angelo was once heralded as a prodigy, but so far he has not lived up to that billing. He was a 1st round pick of the Penguins in 2007 and was later traded as part of the Marian Hossa deal. He has yet to play in the NHL thus far and is having a dismal season with the Chicago Wolves with 10 points through 43 games. This is my 4th all-time success with Angelo. This card is the 51st for myy 2009-10 Heroes and Prospect set.

Angelo Esposito
c/o Chicago Wolves
2 of 3 did not sign duplicate
13 days
Posted by Rob's TTM Graphs at 9:42 AM

Cool to see someone else is working on this set! I'll be checking in to see your successes for sure. Are you just doing the base set or the full 200? I have most of my returns posted on my blog, jonwaynesautos.blogspot.com

I'm am currently working on the base set but I have the update and I am sporadically sending them out too. Look forward to seeing your successes.