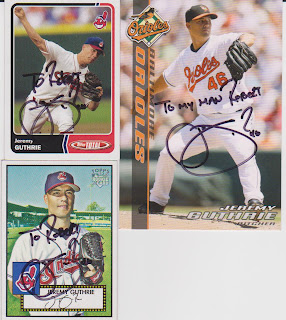 Jeremy was considered one of Cleveland's top pitching prospects but never florished as a starter for the Tribe. He was picked up by Baltimore and has become a very good pitcher with great stuff. He is usually overlooked since he plays in one of baseball's toughest divisions. His season has been up and down but he has began to settle in and will likely become a tough #1 or 2 pitcher for the O's. Jeremy was so kind to sign all 3 cards that I sent him. He must have took the time to read my letter also as he personalized all the cards to me and wrote an awesome inscription on my postcard. That is one of the things that makes TTM autographs so great, the autograph isn't just a generic scribble but he took the time to make it a very cool collectable. Thanks so much Jeremy and best of luck.
Posted by Rob's TTM Graphs at 4:09 PM